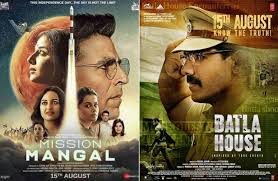 Actor Akshay Kumar has once again emerged as the ‘khiladi’ of the box office. According to a report in Box Office India, the film did well in city multiplexes, through good word of mouth. The collection was also helped by the fact that Thursday was a national holiday (73rd Independence Day) and festival Raksha Bandhan.

On the other hand John Abraham film Batla House also started off well and collected 13 crore at the box office. Both the films have got average rating through critics. It was seen that controversies were trying to be created by John said he would have loved if it would have happened but there is absolutely nothing like that. He said they have been good friends and it also seen before. It is just that two films are releasing on one day. Both the superstars are happy with each other and wish them good luck before the release.

Both Mission Mangal and Batla House received average reviews from critics. The Hindustan Times review for Mission Mangal appreciated Akshay Kumar’s eager performance but was critical of the film’s treatment of its female scientists. Batla house gives a promising character but at the ending is kept for too long.