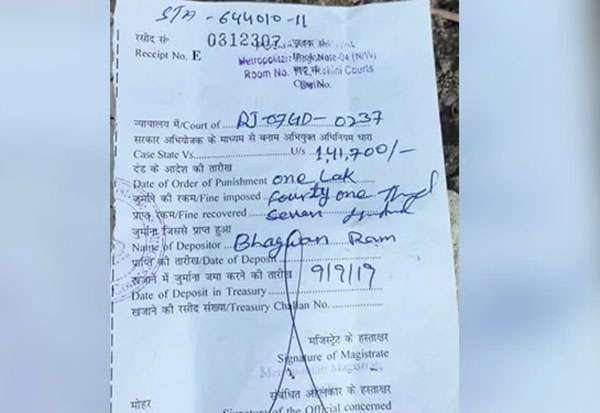 Delhi: The new Motor Vehicles Act is giving sleepless nights to many people. While a few days back, an auto driver was fined Rs. 42000, this time a Rajasthan truck driver has come under the radar.
A truck owner from Rajasthan paid a challan amount of Rs 1,41,700 at Rohini court for overloading the vehicle on September 5.
Bhagwan Ram, who owns the truck, paid the challan amount at Rohini court on September 9.
After the heavy fines introduced in the Motor Vehicles (Amendment) Act 2019, hefty challans for traffic rules violations by the police have hit the headlines.
The Motor Vehicles (Amendment) Bill 2019 was passed by Parliament in July and its increased fines came into effect from September 1.
Under the new rules, the fine for driving without a seat-belt has been increased 10 times from Rs. 100 to Rs. 1000. Using cellphones while driving can attract a fine between Rs. 1,000-5,000 – up from Rs. 1000.
For drunk driving, the fine has been hiked from Rs. 2,000 to Rs. 10,000. Speeding has a penalty anywhere between Rs. 1,000 – Rs. 2,000.
In case of any road offence by underage drivers, the guardian or owner of the vehicle will be held guilty. The penalty will be Rs. 25,000 along with three years in jail and the registration will be cancelled.